Swimming in a volcano

When someone asks if you want to go swimming in the crater of a volcano, you’ll probably think they’ve lost their mind.

If the volcano is Apayo, a half an hour car ride from Granada, Nicaragua, you should immediately take them up on their offer. This volcano is practically extinct.

The last time it erupted was well before the current age, though there is still an active fumarole (an opening in the earth that emits steam and gas) on the western side of the crater, which means it is only sleeping – sleeping very deeply.

After the last eruption 23,000 years ago, the huge crater, some 7 kilometers across, began to fill with rain water. With the rain, lush vegetation began to grow along the sides of the crater. Over the millennia, it became a wild and mysterious place. The Apoyo Lagoon is one of the most beautiful swimming holes I’ve seen.

In 1991, the lagoon and surrounding crater forest were designated an national park by the Nicaraguan government. Efforts are being made to regulate the development, though several projects have been approved. 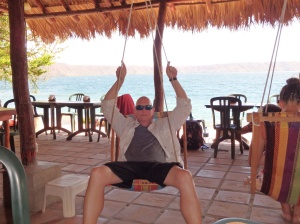 It wasn’t until the last century that anyone ventured to the top of the volcano and ventured inside to see this amazing ecosystem inside the crater. And, it wasn’t until a couple of decades ago that small hostels began sprouting on the sloping western crater walls where a warming sun bathes the guests in morning sunlight and the shade cools them in the afternoon.

The water is a constant 84 degrees, the manager at Hostel Paridiso told us. I believe that’s true near the surface where we swam, but with an average depth of 82 feet (it drops off quickly a few yards from shore) and the center depth in a cone near the center approaching 825 feet, it’s likely pretty cool for those who might want to dive deeper.

In addition to swimming and just plain lounging on the beach, there is free kayaking and inexpensive windsurfing lessons.

There’s not much development beyond the few hostels on the western side. A few outcroppings of casitas here and there along the winding paved road that leads downward from the Pan American Highway to the shore and a couple of makeshift restaurants along the way are pretty much all that is there.

Environmental groups have said that human intrusion is already leaving its mark on the wildlife. Visitors leave behind myriad trash – plastic bags and bottles, clothes, shoes and other items that are a threat to everything from the migratory birds to the the howler monkeys high in the forest to the fish (including several that are found only in this place). Of course, there is a constant battle between Man and Nature. Hopefully a balance can be found before development is rampant in this unique place.

We arranged our trip to the lagoon through our hostel and paid $17 apiece for the van which picked us up and dropped us off at the front door. The price included our admission to the park. While there we had each lunch and a snack, a beer, two sodas and a water for an additional $3.50! It was a bit of a splurge for the day, but worth it to escape the grittiness of the city for the day.

Like Loading...
This entry was posted in All posts, Budget, Granada, Nicaragua, Photos, Vicki "Mamita" Barnes. Bookmark the permalink.

2 responses to “Swimming in a volcano”

Sustainably South is a bicycle tour from San Diego California, to the 2014 FIFA World Cup in Brasil. Along the way we will be hoping to promote things we find important such as bicycling, farming, and preserving natural environments. The bicycle will provide us an economical and environmentally friendly means of transportation for this journey.

Along The Way This Morning

Photos and thoughts from along my way