Heredia, a half an hour from the airport  near San Jose,  known as the Ciudad de Flores (the city of flowers) is not a big city, though the crowds are nearly stifling even on a Friday afternoon. Shopping, bars and restaurants line the streets radiating from the central square that is dominated by the historic church – la Iglesia de Immaculata. 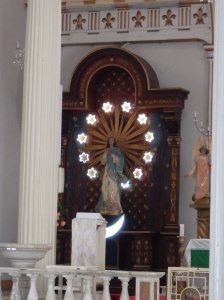 The church, originally built in 1797, was destroyed by an earthquake a few decades later. In the early 1800s, a new church – described by the locals as “stubby” – was built. They say it is more resistant to earthquakes, they say. It has stood for nearly two centuries now, through more than a few tremors.

The church, unlike most back in the states, is open for worshipers. A few people on their lunch break slid into the  pews, murmured a quiet request and slipped back out into the square. 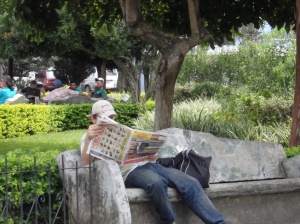 In the  square, lovers chat on benches, children play on the ground and vendors sell their wares.  Sculptures are scattered around the central fountain. Many people take advantage of the shade under the trees to read the paper. In the news right now is the national election (president, senate and congress) and Costa Rica’s presence in the upcoming World Cup.

We stopped at a local restaurant for lunch. A small  pizza, a few beers and some fancy lemonade cost us about $10. Another $10 was added to our visit in the form of a parking ticket. We’ll have to pay the ticket at the national bank – they tell us the cost will be reduced a bit if we pay today or tomorrow. 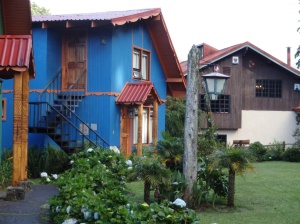 Our hotel, Hotel Chalet Tirol, is a short drive up a winding road, is in the lower reaches of the rain forest. Designed to look like a German village…a dozen or so miniature chalets. Gorgeous gardens of tropical flowers dot the grounds. At about $30 a night, it’s more than we’ll spend later, but with other travelers joining us, we are going more upscale.

Included in our cost was a hearty breakfast. We had a choice of a traditional American choice (bacon, eggs, hash browns) or the tipico Costa Rican fare of gallo pinto (beans and rice), eggs and plantains. Fresh fruit came with either option. 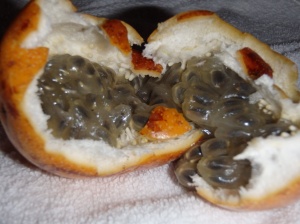 At a supermarket later, I bought a random fruit that I had never seen…grandilla. An orange fruit that when broken open contains a nearly liquid seed sac. Not too sweet, but not really tart. The best I can figure, it’s a passionfruit or something like it.

Here, the sun rises at 5:30 in the morning and sets at 5:30 pm. We’ll turn in early and start anew early tomorrow.