We traveled an hour and a half up and down narrow mountain roads to Volcan Poas after a hearty typical breakfast this morning. Hairpin turns around blind curves, speeding trucks crossing over one lane  bridges and deep gullies along the road’s edge made the trip seemed more like Mr. Toad’s Wild Ride than a Saturday afternoon excursion.

It was $10 for each of us to enter the park and another $3 to park the car (the budget will tidy up a little more once we ditch the car). The fee seemed worth it. Who can put a price on the chance to look down into a crater?

Nearly 3,000 meters up, past beautiful wildflowers and exotic plants, we were told the crater of the volcano was just below an observation platform. We had so looked forward to looking into the eye of the volcano. But, it was not to be.

The area is known as a cloud forest. Like a rain forest, it is perpetually moist, but additionally the clouds – like a persistent thick drizzling fog – frequently settles over the canopy. As we moved up, we could see clouds creeping across our path. Reaching out and touching a cloud was exciting, though it seemed less likely that we’d be able to see the crater.

At the summit, we looked down and saw thick, white nothingness. Peaceful in the purity of its quiet, the damp blanket of white wrapped around us in stark contrast, 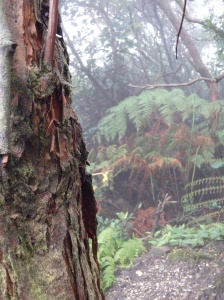 Trudging back, in the cold and the damp, we were cheered by the colorful flowers and the vibrant green against the blackness of the deep forest. Ferns and bromeliads that seemed familiar to us, daisies and impatiens that we knew, but there were other exotic fauna that were strangers amid the slippery soil along the paved path.

I was fascinated by a plant,  Gunnera  insignis, known as Poor Man’s Umbrella. Many years ago, the large, rough leaves served as protection from the constant rain in such areas. Left to grow, they can get incredibly large. We found one as big as me.

As we headed back, we crossed under the clouds, the valley opened below. The more we  dropped in altitude, the higher the temperature rose. The sun beat down and we shed layers of clothes. By the time we stopped for lunch at the foot of the volcano, three layers of clothing had been shed.

At lunch I picked up a cool recipe for a new feature on Street Food that will debut on Budget Nomads soon.

Quickly, though, the sun dropped, the temperature went with it. Layers were put back on. A fuzzy layer of dampness spun around us. We had planned to head to the beach on Monday, but we came to Central America to escape the cold. Plans have changed. In the morning, we’ll leave the cloud forests and mountains behind and head for heat and white sand…

Like Loading...
This entry was posted in All posts, Costa Rica, Vicki "Mamita" Barnes. Bookmark the permalink.

Sustainably South is a bicycle tour from San Diego California, to the 2014 FIFA World Cup in Brasil. Along the way we will be hoping to promote things we find important such as bicycling, farming, and preserving natural environments. The bicycle will provide us an economical and environmentally friendly means of transportation for this journey.

Along The Way This Morning

Photos and thoughts from along my way