In Latin America and throughout the Caribbean, dominoes is not a slow-moving children’s game where pieces are cautiously matched.

Here, it is a crashing, raucous game…still played mostly by men…punctuated by curses and name calling.

CRASH! The tiles are flipped face down and shuffled around the table until everyone is satisfied. One man takes a swig of his Bilikin beer. He drags seven tiles over, as do the others.

BANG! The first ivory tile clatters on to the wooden table. The four men in this evening’s match had begun their play in the afternoon. The sun is down now and the mosquitoes are beginning to annoy.

“203 to 237,” the older gentleman with the spiral notebook who has been keeping score announces. Grumbling and some cursing ensues. It’s hard to tell what they’re grumbling about. The game is almost done. The first team to teach 250 wins.

For those who don’t know all the rules of this game, it can be difficult to follow the strategy. The movements are fast and furious. There’s a lot of banging and clattering of tiles mixed with excited chatter. It seems random but the concentration is evident on the players’ faces.

The origins of the game are unclear. Dominoes were either invented by the Chinese or the Egyptians, some time in the early part of the 13th century. Some say Christian missionaries brought the game to Europe in the sixteenth century and Europeans left the game wherever they colonized. 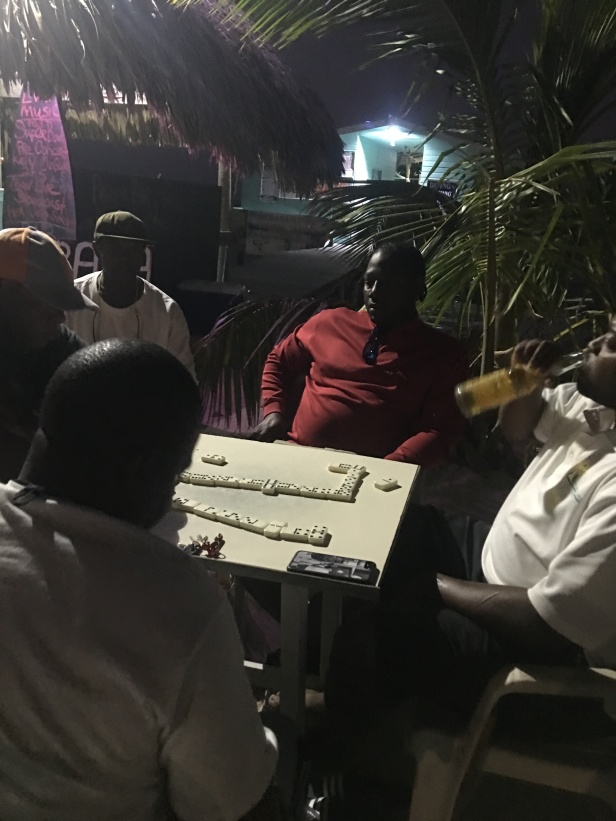 Some say the game caught on in the tropics because it’s too humid to shuffle paper playing cards properly. The ivory (more likely heavy plastic these days) doesn’t stick or fold or lose its shape.

”F-ING BASTARD!” one of the players yells out to no one in particular. None of the others look up from the tiles in their hands. Then, as suddenly as the curse, two players crash tiles one after another onto the table.

BANG! BANG! BANG! And, then, one throws his hands in the air. He’s put all his tiles on the table. The round is over.

A few more sips of beer while the scorekeeper tallies the round. No winner yet.

A full game can last anywhere from 45 minutes to over an hour. It’s a very serious matter to some players. It’s like chess and poker rolled into one.

”They are not joking around,” the scorekeeper whispered as one player made a reference to another’s parentage.

BANG! Another round begins…